Tom's first catering job was a stint as commis chef at Calcot Manor in Gloucestershire. He also worked for Stephen Bull and Gary Rhodes before joining Odette's in Primrose Hill. After a spell at Monsieur Max in Hampton he moved to Norwich to take over running the Michelin starred restaurant Adlards.

He then decided it was time to find his own place taking over a run down pub in Marlow called The Hand and Flowers. Since opening The Hand and Flowers in 2005, Tom's career path has progressed and grown with the support of his wife Beth and many members of key staff, allowing the business to grow and diversify.

In 2014, the team opened The Coach, Marlow, 200 meters down the road from The Hand and Flowers. A fantastic sister restaurant built with the same ethos and drive for British produce, food and drink.

In 2009 Tom first appeared on television competing in the Great British Menu for BBC2, where he won the main course and cooked at the banquet for Price Charles and Camilla. He competed again the following year and proceeded to win the main course for the second time, this time cooking for a banquet in Leadenhall Market in the City of London.

Tom is the author of three best-selling cookbooks, Proper Pub Food, Best Ever Dishes and Tom's Table. A fourth book is due out January 2017, titled The Dopamine Diet. This is a personal story of recipes that reflect Tom's change and outlook to food having lost ten stone over the past three years. 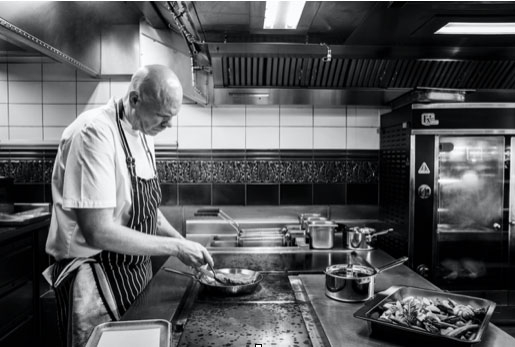 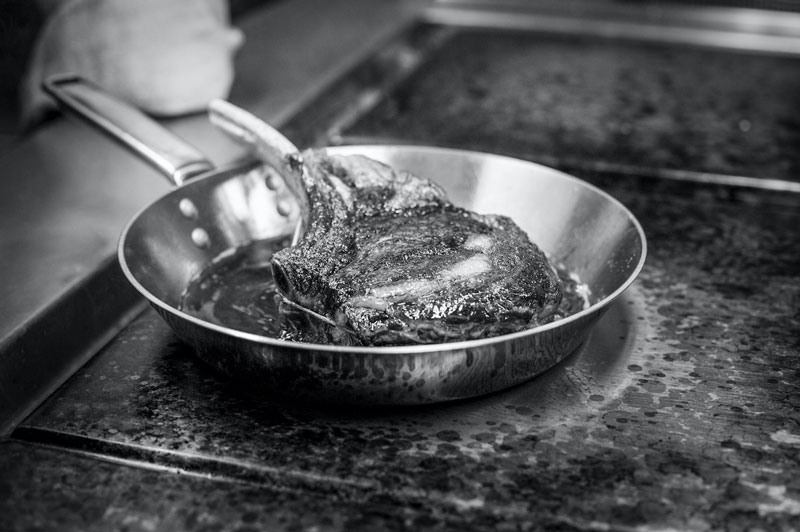 These pans are used by Tom and his team at his two Michelin star pub, The Hand and Flowers in Marlow.

Made from a tri-ply combination of bonded stainless steel and aluminium these pans are induction compatible and the thick gauge aluminium provides ideal conductivity. Complete with lid, this pan is rapid to the boil and offers smooth, even heat distribution,

Performing to a professional standard on both induction and gas hobs, the pans are ergonomically designed to create the perfect balance of control and durability. The smooth feel handles have been designed to provide the optimum length for best weight distribution; each handle is riveted to the base by hand to provide extra strength. An all-round pouring rim allows clean and consistent pouring from any side of the pan.

These products are produced to the highest quality in Britain, are extremely durable and are designed to last you a lifetime of heavy use.

The story of the Tom Kerridge Cookware range

From the very beginning, the concept for the range has focussed on creating products that are of professional quality; products that could stand their ground under the tough conditions of a professional kitchen whilst giving your domestic chef beautiful tools to cook with and present great dishes with at home.

“All of these products have been tested and are meant to be used rather than just looked at and stand the test of time. Think 'Land Rover Defender' for kitchen"

Tom approached the project knowing he wanted to do things differently. Tom, from the outset, knew he wanted to work with British manufacturers. He wanted to marry his knowledge as a professional chef with the skills and experience of master-craftsmen and he wanted to discuss his ideas and learn about how to bring his ideas to life. Knowing that only the best would be good enough, the team set off scouring the UK for manufacturers who could deliver the vision for this new range of British made products.

The range is an honest representation of what we as a nation are able to produce and the skills that are alive and kicking in our manufacturing regions.”

Pans in a professional kitchen have to be hardwearing and capable of keeping up with the demands of the chefs using them. The biggest test for the range of pans came when they were taken into the kitchen at Tom’s two Michelin Star pub The Hand and Flowers in Marlow.

The chefs agreed to put the pans through their paces and with baited breath, everyone watched and listened intently as milk was boiled and steaks were fried. After the initial test, Tom is very proud to say that his chefs at The Hand and Flowers now use his range of pans and will do so from now on.

"With this product range, I've been given a great opportunity to produce essential kitchen items that have the same inbuilt qualities that I look for within my own personal business structure - strength, durability and longevity. The journey that I embarked on trying to find manufacturers to become involved in this project was an exciting and eye opening one. We are constantly told that British manufacturing is on its knees but I found the opposite; strongly focused people with a passion for quality and honesty. All based in Britain, every single one of these manufacturers has the same inherent beliefs about what they do, as I do for my business, and we all believe passionately that this project is an exciting one and are all looking forward to being a part of the British home and cookware industry''

The company behind the pans is Samuel Groves who are based in Birmingham. The business started in 1817 and is well established and highly respected in the professional catering trade.

The pans are made from tri-ply stainless steel and are induction compatible.

The multi-layer material benefits from the core aluminium’s thermal efficiency, which spreads heat evenly and regularly all over the cooking pot. Heat from the cooktop is immediately distributed by the multi-layer material and the whole body heats up at virtually the same speed making the temperature at the top of the pot almost the same as that near the heat source and this is true for all heat sources including induction. The induction properties come from the outer layer of 430 Stainless Steel, which is magnetic and has excellent finish quality.

The handles of the pans are ergonomically designed to feel comfortable and they are hollow cast using stainless steel. The hollow design makes them resistant to heat transference and the stainless steel makes them robust and long lasting. Each handle is individually riveted to the pot bodies by hand using a 'Fly Press.'